The day after arriving in Cayenne, we left for Camopi, a rather long trip: minibus to Saint-Georges de l'Oyapock, military truck to the Maripa rapids, then canoe to Camopi. We were warmly welcomed at Maric camp (a big thank you to the camp Major!)

Our supplies arrived by plane an hour after us and we had to prepare our bags for the 4 week expedition. The boxes filled with freeze-dried supplies given by the Armed Forces of Guiana (Forces armées de Guyane) lined up to 13 feet long and 5 feet high. Impossible to bring all of it in the canoes along with all the other equipment (chainsaw and fuel to clear an area should there be an emergency, communication devices,  generator for the scientific material, Vincent's camera, etc.), including personal items.

So we spent a lot of time sorting and repackaging. Since we couldn't take it all, we had to choose the most strategic supplies: each person could bring enough to fill a waterproof bag, but no more! Where I was concerned, I made sure to have one freeze-dried meal per day, a breakfast and a few extras (dried beef, dehydrated chocolat croissant that I repackaged to gain space).

MY FOOD BAG IS THE SMALLEST...

I'm counting on the 7 lbs of rice stored in my container to provide the rest. So my food bag is the smallest and every morning I anxiously ponder whether I was not a little presumptious! We had supplies planned for our native guides Lucien and Patricia, but this type of food isn't their cup of tea. They prefer cassava semolina which we also brought in large quantity. They will add to the supplies by hunting and fishing whenever it is possible and legal. The Camopi has already provided several types of fish, so all is well.

Once the supplies were sorted and put away, we repackaged the rest of the equipment. All fragile material had to go into waterproof containers since it is easy to flip a canoe (we will soon experience this). We also closely looked at how to distribute the loads, tie them to the canoes so we don't lose anything when capsizing (a useful precaution!).

Morning of Friday June 7, departure day has arrived. We rowed to Lucien's who was finalizing last minute details, such as having his kids watched while he was gone since he was coming with his wife Patricia. We are in fact quite happy she will be sharing her experience with us as a full-fledged guide. I believe it is rare that "expeditions" in Amazonia have confered this title to women, despite many having been on the trips. So for us, it's a way of giving legitimacy to the role, often ignored, of women in the exploration of the big forest (and to revere the soul of Octavie Coudreau!).

IT RAINED A LOT, THE CURRENT IS VERY STRONG

Right from the start we realized the challenge before us is far from trivial, especially right now. The rainy season was late and it has rained a lot lately. The Camopi is very high, as are probably all of its tributaries. It would be an advantage if we were traveling by motorized canoe because we would be high enough to go over the rapids without seeing them. But with paddles, it means facing very strong currents for most of the trip and the cross-currents in the rapids make it difficult to pass them.

Despite a difficult crossing at the "bad rapid" (IGN toponym), we made good progress. Same thing the next day, June 8. The capsizing at the "Devil's rapid" could have cost us dearly (for example, losing a food supply bag), but nothing was lost (since it is well tied down). If the river was lower, the issue wouldn't be as important since the flotting objects would gently float downstream of the rapid and we could recoup them. But with the current as it is, they will get to Camopi faster than we can get them.

BIT BY A SCORPION

On the morning of the 9th as we were getting ready to leave when Vincent, the journalist who is documenting our expedition, was bitten by a big black scorpion that was hiding in the fold of one of his bags. Other than the pain, we had to be prepared for a possible violent reaction to the venom. Here again the Camopi military base came to the rescue by evacuating Vincent to the clinic for observation. As for us, we spent the day in Lucien's rampart waiting to see how things would turn out. We were relieved to hear that all was well and Vincent would take his place among us again. It was agreed that he would rejoin us on Monday morning the 10th.

And so it was and we took advantage of the canoes sent by the Mario camp to go straight to the mouth of the Inipi. Several reasons for this. First, to compensate for the delay and avoid having to chase after time right away. Also, the Camopi river is well known and used up to the Yanioué rapids. So we weren't going to see anything new. Finally, there was no point in risking additional flips or loss of equipment on this leg. We will have more than enough later on so might as well save our strength when possible! We arrived at the mouth of the Inipi and set up camp. 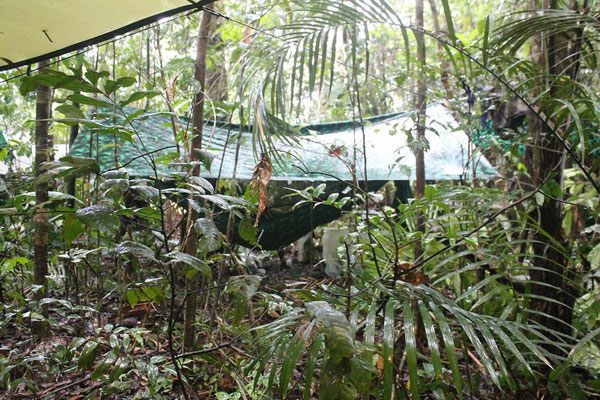 The difference in color between the Inipi inlet and the Camopi's water is spectacular. Upstream of the confluence, the Camopi is black. It carries humus, but no sediment. On the other hand, the Inipi is "milk chocolate" colored: a sign of the presence of gold panners whose worksites produce large amounts of sediment that darken the river and modify its environment.

Today Tuesday the 11th, we did the first leg on the Inipi. We went by a rock that had cave engravings, called Tepokodzawat by the Teko ("Jesuit rock" on the IGN map). Unfortunately, it is submerged due to the water level and we weren't able to see it! The Inipi is not as large as the Camopi, barely 65-80 feet, and much less in some areas. We still have a strong current, but the flow is not as strong and so it is easier to move forward.

ADD TO THE ETHNOLOGISTS' RESEARCH

Our research really starts here. We hope to add to Pierre Grenand and Damien Davy's on-going projects by collecting Teko toponyms of certain areas and by finding sites of ancient villages, specifically "enthroned mountains", ie hills that had a village at the top and was surrounded by a deep ditch (which makes it look like there is a crown on the hill when putting it on a map). We will also see if we can meet illegal gold panners in order to continue the research I have been doing for the past three years in partnership with the Armed Forces of Guiana.

Despite initial difficulties, the team is in good spirits. The military soldiers of the 3rd REI are doing as usual, strong discipline and efficiency, which benefits the civilians. The adventure is really starting now!