by Serge Jaumain, Professor in contemporary history at the University libre of Bruxelles, co-Director of AmericaS – interdisciplinary center for the studies of the Americas - and a member of the scientific committee of the Institut des Amériques.

Though the media around the world is broadcasting, almost on a daily basis, the snap statements of the American president, even the deplorable tomfooleries of his dismal Brazilian imitator, Jair Bolsonaro, the manner in which the Canadian authorities, and specifically those from Quebec, are handling the coronavirus crisis are not sensationalistic and don't hold the international media's attention.

And yet the breadth of what is called "the" COVID-19 in Quebec is remarquable given the number of deaths per population.

As soon as the crisis began, the premier of Quebec, François Legault, chose a very open communication strategy by having a daily press conference. His natural style, direct and colorful, immediately hit the mark, raising the satisfaction rate from 91 to 95 % among the Québécois during close to six weeks! On May 9 this year, the La Presse columnist Patrick Lagacé summarized the general feeling well: "the PM's pedagogy in the frenzied hours of March saved lives, for he convinced the Québécois to lock themselves up, something that totally goes against nature". 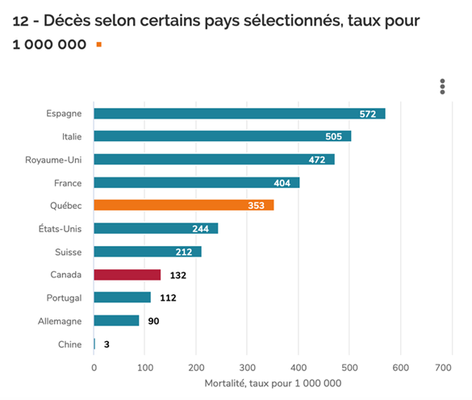 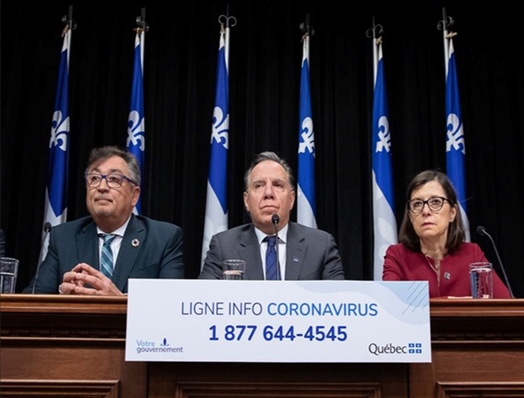 Left: in proportion to its population, the coronavirus mortality rate puts Quebec ahead of the United States. (Source: National Institute of Public Health of Quebec). Right: since the beginning of the crisis, the Premier of Quebec holds a daily press conference surrounded by his National Director of Public Health and his Minister of Health (source: UDEM).

Though the Québécois are all behind their Premier (however, the satisfaction rate is decreasing these days), the first article on this blog suggested that the coronavirus was already acting as an indicator of divisions within the Canadian federation. A month later, it's no exageration to say that the divisions have increased.

So, the pandemic's gross numbers have revealed very distinctive regional differences: in Canada, Quebec is paying the heaviest price, by far, for the pandemic. Despite its confinement policy, today it single-handedly suffers the most contaminations and deaths than the rest of the country, while representing only 8.5 out of the 38 million residents of Canada! Even Ontario, the most populated province of Canada (14.5 million people), is far behind Quebec in terms of number of deaths linked to the pandemic.

However, the regional division witnessed by this data is also internal to Quebec: not all residents are equal in the eyes of the virus: Montreal and its subburbs is the most impacted even when comparing the number of cases per population. 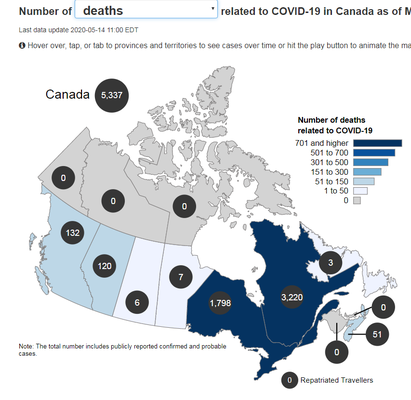 Left: distribution per province of number of deaths linked to Covid-19 in Canada (May 14, 2020, source: Canadian government).

Right: since the end of the month of March, the strong urban area of Montreal-Laval is at the heart of the spread of the pandemic in Quebec (source: National Institute of Public Health of Quebec).

The figures shows that there is another internal division which could be qualified as gender-based since, according to a study published on May 9 by the National Institute of Public Health of Quebec, 60 % of the COVID-19 cases documented in Quebec are women (they represent 54 % of deaths), a percentage that is likely linked to the fact that the immense majority of nursing personnel are women.

As in many other regions of the world, Quebec can't escape from the generational division either: though 52 % of contaminated people are in the 30 to 69 age group, 74 % of deaths are in the 80 and over.

These abstract numbers quickly took on a face: that of one of the long-term care homes (CHSLD) that take in the elderly who are incapable of taking care of themselves. The Herron CHSLD, a private establishment of Dorval on the Island of Montreal, made the headlines when in less than one month 31 of its 150 residents had died, and especially that the administration had not given proper care and services. The shock was all the more jolting when a journalistic inquiry quickly exposed the fact that the personnel of this establishment was working in deplorable conditions and that, on top of that, the real estate developer, the owner of the establishment, was an ex-convict, sentenced on drug and tax evasion charges.

Just as Marie-Andrée Chouinard wrote in her April 14 editorial in Devoir "When the police have to enter a CHSLD and treat it like a "crime scene", it is understood that, as a society, we have gone as low as we can go. It's been years that small bits of horror disclosed here and there have made us realise that, unfortunately, Quebec does not shine in terms of care given to the elderly".

In addition to the fact that more than 80 % of documented deaths in Quebec happened in the CHSLDs and private senior residences, all these elements have contributed to this terrible realization: the elderly population living in these structures have not gotten the attention they deserve.

This awareness has left an impression on the Québécois, leading them to question the suitability of leaving the care of the elderly in the hands of a private sector bent on profit. The Premier himself said he been greatly moved and openly brought up the possibility of transferring all these establishments to the public sector.

Behind this elderly care issue, the division between the population of Quebec and how the health sector itself is organized has therefore wove its way back into the center of public debate. The topic has been at the heart of numerous arguments for a long time. At the last provincial elections, the issue of emergency room waiting times for example was bitterly debated and promises were plentiful. This time, the core of the issue has been refocused on the nursing personnel situation on a wider scale, 10 000 absences having been registered in the health sector, specifically in the infamous CHSLDs.

In order to deal with this extreme emergency, the authorities of Quebec took two measures, both radical and exceptional: calling in the Canadian army and giving a bonus to people working in the essential sectors of the healthcare industry. The federal government having decided to give 3 billion dollars to the provinces to help them increase the salaries of these workers, Quebec chose to use this sum to offer an additional $100 per week to the Québécois working in sectors deemed essential and earning less than $550 per month, and a bonus of up to $1000 per month to those who were willing to go directly to the front and work full-time in the CHSLDs or the hospitals hit by the COVID-19.

If this emergency strategy brought to light the cracks in the healthcare system of Quebec, another crack is gaining ground, this one social: the flare-up in the number of unemployed people. It has reached unprecedented numbers in Quebec: 17 %. The situation is far from being unique to the French speaking province or to Canada. However, in a country where, despite all the crises, the unemployment rate has always remained very low, this evolution has made an impact. Despite the emergency programs put in place, it will likely require further in-depth discussions after the crisis.

In a completely different area, the pandemic created its own set of tensions when it seemed that Health Canada had relaxed its rules with respect to bilingual labels in order to give the population certain health products quicker. Even if the Canadian Premier immediately stated that measures would be put in place because, apart from respecting the linguistic duality of Canada, the security of the users had to be insured, the reaction of the press showed that we were touching on another division in Canadian society.

Finally, the recent discussions on how to re-open likewise did not depart from the customary divisions of the country. As soon

at it had been announced by the authorities of Quebec, the top science advisor of the federal government Mona Nemer cautioned the provincial authorities against going too fast and without proper planning, especially in the larger Montreal region where the pandemic is not yet under control. Even though her opinion was shared by several Canadian researchers and even some from Quebec, it immediately provoked a loud controversy, the Public Health Director of Quebec publicly rebuking his federal colleague despite the questions, rather legitimate, she was posing. So, despite the crisis and a certain national solidarity, tensions within the Canadian federation are never very far!

Globally however, opposition to the central government and the federated entities in Canada is a far cry from the excesses we've seen today in other federations such as the United States and Brazil. The prime minister Trudeau (who by the way is at the head of a minority government) has shown extreme caution in his stances, regularly emphasizing that health was indeed the provinces' responsability and that he wished to help first and foremost. Though he has mentionned, in a rather timely fashion, that as an elected official from a Quebec district he is particularly attentive to the current situation in the province, his pragmatic attitude has helped avoid strong tensions between the different segments of the federation. However, this strategy, closely linked to the institutional situation of the country, does have as a consequence that, as brought up by the top scientific advisor of Canada, since each province creates its own rules, it doesn't make it easy to have a national coordination in a domain where it is rather essential.

Serge Jaumain co-directs AmericaS, the interdisciplinary studies of the Americas at the University libre of Bruxelles.  He is a member of the scientific committee of the Institut des Amériques and the editorial board of the journal IdeAs. He currently heads the Scientific Council of the AUF (Network of French speaking universities). His current research is focused on the history of French immigration in the Americas. He recently co-directed a book on Les élites et le biculturalisme, Québec-Canada-Belgique – XIXe-XXe siècle (Septentrion, 2017) with Alex Tremblay-Lamarche.