guarani language, phone and forest: paraguay's resources against the coronavirus

Capucine Boidin, Professor in Anthropology and Director of IHEAL – Sorbonne Nouvelle University. She is a member of the editorial board of IdeAS, the Journal of the Institut des Amériques.

It's with a bilingual Spanish/Guarani hashtag (#QuédateEnCasa  #EpytaNdeRogape) that Paraguay closed down schools and suspended all gatherings starting as early as March 10.

A few days later, the top headlines in the national newspapers were also using both languages by proclaming in Guarani "The strength of our courage will push back the coronavirus" and in Spanish "the Guarani claw will conquer the coronavirus". The Guarani vocabulary is still summoned to name the two financial aid programs put in place because of the current virus Pytyvõ "to help" and Ñangareko "take care". Confronted with the virus, an "outside" threat, the country therefore reconnects with a long historical tradition: use of the Guarani language to stimulate national combativeness and solidarity.

It was after the fall of Stroessner's dictatorship in 1989 that Guarani became an official language (1992) in Paraguay. It is also taught in schools since 1994, which explains its use whether oral or written, especially in the media. It is more spoken than Spanish: 70 % of the population speaks the first one at home on a daily basis whereas 57 % for the second, when only 2 % of the population is considered indigenous. Even small non-Guarani speaking native communities and German or Korean migrant communities speak it alongside Spanish in order to interract with most of the population, especially in rural and suburban regions. 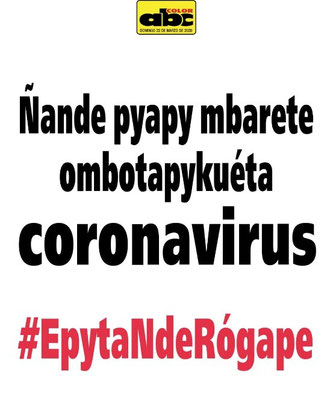 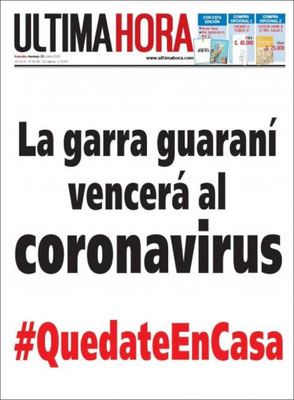 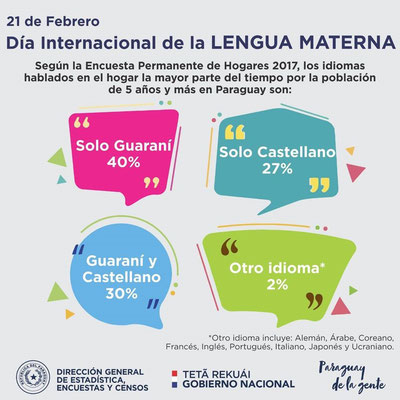 For the majority of the population, Guarani, inseparable from catholicism, is the language of patriotism, a recruted and rallying language during the War of the Triple Alliance against Uruguay, Brazil and Argentina (1864-1870) and the Chaco war against Bolivia (1932-1935). Today the language no longer castigates an ennemi, but it advises on the measures to follow when one returns home: desinfect your shoes, your things, wash your clothes, wash from head to toe, and only then kiss your family. In other words, fight the potential virus in all corners before cuddling.

In reality, for now, the epidemic seems to be at least contained: on April 29, the Ministry "for Public Health and Social Well-being" (Tesãi ha Teko porãve Motenondeha) announced only 249 confirmed cases, 9 deaths and 102 healed. 80 % of the cases were in the capital of Asunción's metropolitan area, with an average age of 37. Only 15 people are in a controlled isolation, 4 hospitalized and none in intensive care. For now, it is one of the lightest official assessment of Latin America, behind Salvador and in front of Nicaragua.

Perhaps some of the country's demographic and sanitary factors are helping. Although the Paraguayan population sees a regular increase of 64 in the percentage of its inhabitants, they only represent 6.43 % of the population (15 % in Uruguay, 16 % in Ecuador and 20 % in France) and they are not all gathered in retirement homes. Also, the obesity rate (16.3 %) is lower than Ecuador's (18.7 %), France (23.9 %) and Uruguay (26.7 %). High blood pressure indicators are not available in Paraguay, but it's also likely to be lower than other places. The situation can change because the first infection, linked to a Paraguayan's business trip to Ecuador, only goes back to March 7. But one can admire the speed in which measures were taken and put in place, as well as the constant communication from the Minister of Health Julio Mazzolini via press conferences, but also through his Facebook and Twitter accounts.

In order to mitigate the basic needs that the confinement brings to the most vulnerable, the programs Pytyvõ, organized by the Ministry of Finance, and Ñangareko from the national emergency office, propose additional financial aid for disadvantaged families: around 500 000 guaranies (77 dollars, which is about 25 % of the minimum wage) for the purchase of essential food items. One of the program's distinctive features is the fact that it is totally based on electronic means. Enrollment is done and finalized by phone or computer, the beneficiaries and the accredited businesses are published on-line and the beneficiaries receive the money in an electronic wallet. The goal is to help approximately 1 600 000 people, so around a quarter of the 7 million inhabitants that are under the poverty threshhold (Data from the Office for National Statistics, 2019).

Use of portable phones to manage these programs should not be a surprise for this country, as in many others, where the number of lines is greater than the number of inhabitants (108 %). The use of electonic wallets started with Tekoporã "live well", a conditioned monetary transfer program to fight against poverty and put in place by the office of social action in 2005. In order to reach the dispersed and remote populations which were unable to get to automatic tellers, even mobile ones, or take out bank cards, the monetary transfers were done via portable phone. The same system was generalized to the program intended for senior citizens under the poverty threshhold. Both transfer programs also modulate the life of 2 % of the population considered indigenous, indígenas in Spanish.

Among these, the Aché (formerly called Guayaki, especially in the works of Pierre Clastres) organize themselves by mobilizing their own resources.

Philippe Edeb Piragi, a French anthropologist who has been with them for over thirty years and an advisor of the Aché association LINAJE (Liga Nativa por la Autonia, Justicia y Etica), told me in his April 24 email that "in this time of uncertainty and loss of meaning for the "White people", a majority of Achés -just as much evangelical and converted- continue to perceive the forest as protector and nurturer. They took advantage of the confinement and the school closures to go back there on the first weeks of March to enjoy together the hunting and fishing activities that help them restock on healthier proteins (according to them free from vaccines and viruses) and renew more intensely the widespread reciprocity between participants. This forest "immersion" -never forgotten but much more important and community-based than normal among several of the current large communities- helps them to restore, in my opinion, weakened or looser relationships on the reserve and reaffirm a community unity faded or fractured in their everyday sedentary life. They are less likely to find immediate salvation in the temples or the evangelists' bibles than in the woods of east Paraguay or, in any case, in what is left of the "Atlantic Forest" decimated these past decades by the production of soybeans and cattle.

In this time of pandemic, Paraguayans lean on Guarani, portable phones and, for some, on the resources of the few forests still standing to fight against the virus and renew bonds of solidarity.

Capucine Boidin, Professor in Anthropology and Director of IHEAL – Sorbonne Nouvelle University (CREDA UMR 7227). She is a member of the editorial board of IdeAS (Idées d’Amériques), the Journal of the Institut des Amériques.