in the united states, the health crisis is intensifying the housing crisis (and vice versa)

by Florence Nussbaum, PhD in geography and Teaching Assistant at ENS de Lyon (UMR 5600 Environnement Ville Société). Her research is focused on housing and real estate markets in US cities.

While one out of five tenants are late in paying their rent (Figure 1) and 10 million homeowners are struggling to reimburse their mortgage, the impact of the health crisis exacerbates, but also reveals, the fractures in the US housing market.

Indeed, the epidemic arrives at a time when the housing market is already very tight in many American cities: with the ongoing increase in the prices of homes and rent, the gap between the cost of housing and households' income is becoming wider. In all US states, there are more low income households than affordable rentals. Yet the poorest households, who often have precarious jobs, have been the most impacted by the increase in unemployment caused by the economic crisis. Those who did not have enough savings to deal with the loss of income have had to go into debt in order to pay their rent or reimburse their mortgage loan, and those who stopped paying were threatened with eviction or foreclosure despite moratoriums put in place at the local and federal level.

AN INDICATOR OF SOCIAL AND RACIAL HOUSING DISPARITIES

These disparities already existed prior to the crisis, but the crisis has increased them. Some neighborhoods therefore accumulate several disadvantages, at the social as well as at the public health level. In New York, there were lots of evictions in neighborhoods most hit by the coronavirus, such as the Bronx. In the United States, the racial dimension cannot be separated from social inequalities. A survey done in May 2020 shows that tenants and homeowners from ethnic minorities were particularly hit by the crisis: close to a quarter of the African American renters questioned were unable to pay that month's rent versus only 12% among white renters (Figure 2). This can mainly be explained by the size of the rate of effort, i.e. how much of the ethnic minorities' income is used for housing expenses. In Washington, D.C. for example, Hispanic households on average spend a third of their salary on rent (32%), while for white households the percentage does not go above a fourth (23%). This disproportion makes them more vulnerable in case of loss of income, many low-paying jobs not offering unemployment benefits, as for example when there is no job contract. Consequently, the coronavirus epidemic and its economic consequences have significantly affected housing conditions in the United States. 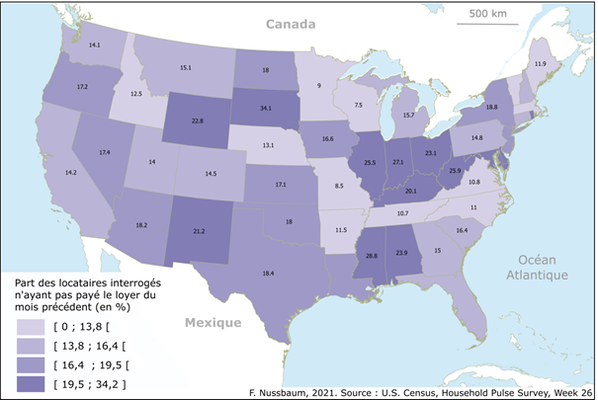 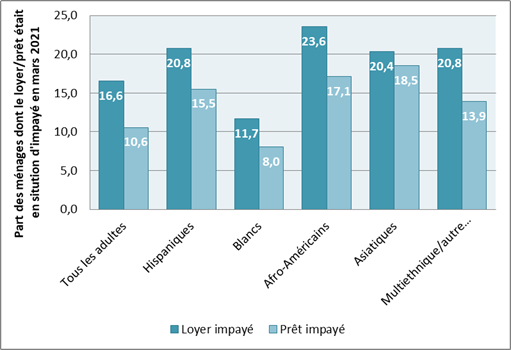 According to a survey done by the US Census Bureau on the impact of the pandemic, the Household Pulse Survey (HPS), close to 17% of the 50 million renters questionned in March 2021 had not been able to pay rent in the preceding month (we substracted from the 54.3 million people questionned those who lived rent free). In some states, such as New Mexico, Illinois, Ohio and Mississippi, the percentage of unpaid rents goes above 20%, so 1 renter out of 5.

NB: the "multiethnic/other" category includes people who have identified themselves as Native Americans coming from the Pacific, and those belonging to several ethnic categories.

The administration took several measures to help limit the impact of the epidemic and the lockdown on the economy. At the end of March 2020, the White House announced a 60 day moratorium on foreclosures in order to help struggling homeowners[1], and several states, such as California and Arizona, declared that foreclosures and evictions would only resume after the state of emergency was over. In February 2021, the Biden administration announced that relief measures to homeowners would be extended until the end of June because of the health crisis, so a moratorium on real estate foreclosures and the forbearance of mortgage payments.

This early help given to homeowners is likely to limit the explosion in foreclosures, and so to maintain housing prices high, mitigating the impact of the crisis on small homeowners despite the increase in unemployment. However, these measures are only relevant to mortgages guaranteed by the federal government, therefore they exclude a third of the loans. Homeowners that do not have access to this help must then negotiate new payment conditions with the entity that holds their loan. Furthermore, since Donald Trump's election, federal agencies offer loans that are a lot riskier: in over a fourth of guaranteed loans by the Federal Housing Administration (so over 50 billion dollars), the debt represents more than half of the borrower's income. So, should there be a huge household default in payment because of the economic crisis, the American government is likely to experience a colossal loss.

TENANTS ON THE FRONT LINE

Furthermore, these different measures are meant to protect homeowners, particularly hit by the 2008 crisis, but tenants are more likely to be impacted by the current crisis. In a context where welfare housing has been dismantled by the Trump administration, tenants with modest means are more likely to become impoverished, and this all the more so that unscrupulous investors have seized a large portion of the residential housing market since the 2008 crisis. In fact, properties foreclosed by the banks were quickly auctioned off by investors, or transferred to firms specialized in rental management. The number of individual homes purchased by institutional investors in the United States is thus estimated at 200 000 over the 2012-2014 period, which represents a total of twenty billion dollars in transactions. Yet, these investors, who often use automation to manage rental units, have also had a tendency to quickly evict tenants as soon as a payment was late, if not impose additional costs or accuse some of being late who weren't.

Rental evictions, put on hold at the start of the crisis with local moratoriums, have started up again in the Spring of 2020 in several states such as Texas. In the State of New York, the number of eviction procedures has increased by 50% between January 2020 and January 2021. Over 222 000 tenants were thus hit with an eviction procedure in that state. The housing crisis therefore is likely to worsen the health crisis by facilitating the circulation of the virus. The residential precariousness of homeless people, who go from one housing center to another, and overpopulation in homes because of cohabitation (when an evicted household goes to live with a parent for example) are factors of increased contamination. Also, precarious households have co-morbidity factors (obesity, diabetes, age) which make them particularly vulnerable to the coronavirus' severe forms of infection. The Centers for Disease Control and Prevention has therefore imposed a federal moratorium on rental evictions from September 4, 2020 to January 31, 2021 in order to limit the spread of the virus, showing the role housing conditions play in the public health crisis.

While the number of new coronavirus cases and deaths are progressively decreasing in the United States since January 2021, due to the expansion of the vaccine coverage, protective measures for tenants are soon to expire. The issue pertaining to the debt accumulated over the past year by a certain number of struggling households will come up, which suggests a social crisis on a  grand  scale once the health crisis has been eliminated.

[1] The Coronavirus Aid, Relief, and Economic Security (CARES) Act, signed on March 27, 2020 stops foreclosure procedures in case of non-payment on federal guaranteed mortgages, particularly Federal Housing Administration (FHA) mortgages and the mixed ownership corporations Fannie Mae and Freddie Mac, as well as rental evictions, for 120 days for housing covered under the federal state aid (so less than 50% of rental units).

Florence Nussbaum holds a PhD in geography and is a Teaching Assistant at ENS de Lyon (UMR 5600 Environnement Ville Société). Her research is focused on housing and real estate markets in US cities.