The Presidential Election and Covid-19: The Pandemic Is the Question

In January 2020, President Donald Trump was preparing to ride a booming economy to a triumphant victory...

In January 2020, President Donald Trump was preparing to ride a booming economy to a triumphant victory. Eleven months later, his defeat seems confirmed. While it is too early to draw many final conclusions from the US presidential election, the significance of the Covid-19 pandemic on the election is already clear.

Coronavirus was one of the decisive factors in Joe Biden’s victory, and its central role in the campaign has been visible since well before November 2. Of course, we cannot say what could have happened if there was no pandemic, but without needing any counterfactual histories, a few things are clear. Covid-19 has been the dominant news story for 2020 as a whole. Trump could have likely guaranteed his reelection (and saved lives) by handling the pandemic well. Understanding this, Biden made the question of how he would respond to the virus the centerpiece of his successful campaign.

From a purely political standpoint, the president’s handling of the virus can be understood as a lost opportunity. During the last week of March and the first week of April, Trump had his best approval ratings since his honeymoon period wore off in March 2017, dipping below 50 percent disapproval and only about a -5 point approval/disapproval gap, according to FiveThirtyEight’s polling aggregator. Trump normally polls between 40 and 43 percent approval and between 52 and 54 percent disapproval, numbers that have remained exceptionally static throughout his term.

Trump’s good polls in early April aligned with the moment when his administration was demonstrating the closest thing to serious leadership that it would give the coronavirus. The White House was holding nightly briefings, leaving room for experts like Anthony Fauci, Director of the National Institute of Allergy and Infectious Diseases and currently one of the most respected and trusted people in America, to give factual information about the virus and make recommendations as to how to prevent the spread.

Trump’s rising popularity represented what the political scientist John Mueller has defined as the “rally ’round the flag effect” in which a crisis temporarily gives a boost to a leader’s approval because the country turns to them for guidance. While these often evaporate quickly, a competent politician could have translated the crisis into a longer-lasting increase in support, even with only limited success in actually tackling the crisis.

One example worth considering is New York Governor Andrew Cuomo who also had a net-negative approval rating before the Covid crisis. Cuomo saw his support skyrocket in April when New York was the epicenter of the virus, with one poll giving him an impressive 77 percent approval rating. His rally ‘round the flag effect wore off much more slowly than Trump’s. In July he was still polling at 60 percent approval despite (or perhaps because of) the strict measures imposed in New York state. Cuomo is of course tracked less than the president, so this data is merely indicative. Nevertheless, it shows how an experienced politician can maintain their popularity during a crisis by responding proactively and appearing to focus on the challenges facing the public. Alternatively, Trump seems to have been more jealous of Fauci’s popularity than concerned with ending the pandemic. Starting on April 19, the president took over the briefings before scrapping them entirely by the end of the month after his embarrassing comments about injecting bleach led to widespread criticism.

The president’s overall response to the virus can be described as ostrich-like. He chose to put his head in the sand and pretend that the virus would go away eventually. Even during the briefings, Trump preferred to play cheerleader for the economy while Fauci warned about hand washing and social distancing. Still, this relatively serious approach was discarded in favor of blind optimism that things would get better and an apparent muzzling of experts. Once the briefings were canceled, Trump’s popularity started falling, reaching near-record lows in June (56 percent disapproval for 40 percent approval, according to FiveThirtyEight). His ratings then regained their balance when the economy began to improve at the end of the summer, but the president never broke past his fairly static pre-Covid average. Going into the election, he did not profit from the increase in popularity available to a leader during a crisis.

What to make of this strategy? Ostriching has clearly failed. The president gained ground when he responded the most seriously; had he attempted even more directly to resolve the crisis, he could have taken full advantage of the rally ’round the flag effect. Even rising numbers of deaths might have served as a dramatic backdrop for a tough leader putting the interests of his country first, an easy victory for an incumbent. Perhaps more importantly, Trump left Biden a great opportunity to demonstrate alternative leadership. Incumbent presidents normally have a significant advantage in the United States and rarely lose reelection, especially when they can claim responsibility for a growing economy like Trump before the pandemic.

In this context, the Biden team logically made Covid-19 the centerpiece of their campaign. While the candidate spoke about a number of subjects, every event he held was a means of signaling the difference between how a potential president Biden would handle the virus and how current president Trump was doing. Biden’s campaign relied heavily on virtual events during the summer with the candidate appearing from his basement studio. When he began campaigning in public, Biden’s events were defined by white circles indicating safe social distancing. This contrasted with Trump’s continued flouting of coronavirus guidelines at his megarallies.

Perhaps no image has been more symbolically significant than the mask. Biden and his staff wore them systematically. The president returned from Walter Reed Medical Center after his own bout with Covid-19 and the first image he wanted to share was him triumphantly removing his mask.

Biden’s overall strategy appears to have paid dividends. The electoral results are clear, with Biden likely taking 306 Electoral College votes (surpassing the 270 required for victory by a comfortable margin).

Covid-19 was the central political story in this election year for a number of reasons, from the high number of mail-in ballots delaying the results to the dominant image each campaign portrayed. Trump’s handling of the pandemic represented a major missed opportunity for him to secure a second term. He could have used the virus to his advantage to demonstrate that he was the country’s true leader in the face of a crisis. However, by not taking charge and by denying and ignoring the pandemic, he let his opponent make his (lack of) handling of the health crisis the primary message of his campaign. 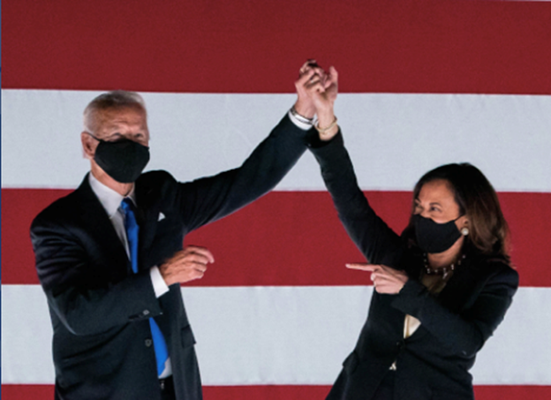 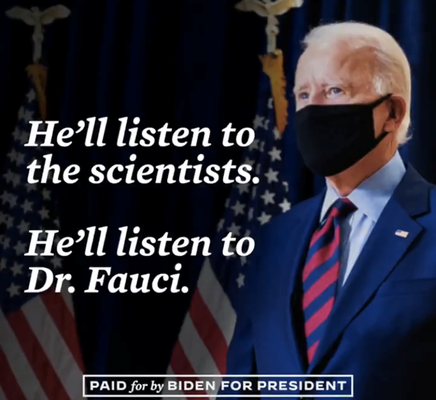 The contrast between the two campaigns can be summed up by an exchange that occurred between October 19 and 20. At a rally in Florida, Trump mocked Biden, saying that he would listen to the scientists and Fauci, unlike Trump himself who had wisely ignored them in favor of the economy. The next day, the Biden campaign released an ad quoting Trump as providing a perfect argument for Biden’s election. In the end, both candidates ended up agreeing about the central role of the pandemic in the campaign and making the vote a referendum on listening to the science.

Michael Stricof is a Professor in American Studies at LERMA, Aix-Marseille Université, and former coordinator of the Institut des Amériques' Washington DC office.