In a previous blog, we showed that the health crisis in Mexico is becoming a multi-shaped crisis. But describing how it manifests itself in a huge country cannot solely rest on macro-economic data. We must also shed light on regional realities, very diverse for sure in such a large country. In order to do this, we propose two illustrations of these differences in the South of the country.

In the past months of the coronavirus epidemic in Chiapas, in southeast Mexico, problems in several regions have made the front-page news. Each time, the same elements come up: residents, worried about the increase in infections and the sudden rise in deaths, get together or explode in anger because of a threat they associate with governmental institutions' actions. Therefore, the fumigation campaigns against the mosquitoes, carriers of dengue, zika and chikungunya, worried the population that witnessed a spreading of the virus itself and toxic products in general; drones are accused of being public toxic instruments; health personnel are being mistreated; secondary hospitals even were damaged. How can we understand these reactions?

One example: on the night of May 27, 2020, a small popular rebellion began in the little town of Venustiano Carranza. It all started from a drone that seemed to be dropping a suspicious white powder was knocked down, and from an alleged fumigation project of the municipal authorities, while several people had died, probably from the coronavirus. Many residents then decided to block the city and stop at all cost what they said was an attempt to poison the population. The situation degenerated during the night and several buildings were burnt, including the town hall, a hospital and houses associated with the ruling class, of which the one belonging to the mother of Chiapas' governor.

These events were then criticized in the media through the lens of racism that permeates Chiapas society: Venustiano Carranza was presented as a tsotsil indigenous city governed by "rituals and customs" (i.e. "backwards people who reject modernity", ignorant and violent by nature). What was especially highlighted in the news is the fact that Easter celebrations, with its closely followed processions, were maintained in this city, therefore assigning the blame of huge number of cases on the local population's lack of responsibility.

The eruption of group psychosis directed at government institutions, as well as the racist media discourse in response to it, are both indicators of the current social fractures in Chiapas, one of the poorest Mexican states and where native people are the most prevalent. The disbelief with respect to the pandemic, quite present in popular sectors, is not only a product of lack of information, but also a deep distrust in the Government and its institutions. The public health system, especially, despite policies giving free access to healthcare to the poor, is known for its medical negligence, bad treatments given to people perceived as indigenous and the absence of justice when mistakes are made by the health professionals. Let's remember the case of the children that were poisoned in May 2015 in another tsotsil village, in Simojovel, during an official vaccination campaign where the wrong dose led to the deaths of two minors and the hospitalization of 29 others. Instead of exposing the causes of the tragic event, the Administration chose to cover it up and to buy the families' silence by giving them large sums of money. The lack of transparency, the institutions' corruption and the racist biases that blur communication therefore provide an explanation to the lack of trust of a portion of the population toward government institutions in general and the health system in particular.

In this context, we can better understand why we can often hear that the virus is deliberately spread by government agents, that it doesn't exist, and also that you should definitely not go to the hospital if you get sick because you get killed there. And so families encounter so much resistence when trying to bring their sick there that, when they finally consent to do it, it is often too late and the person dies quickly, which only feeds into the animosity and suspicions toward the institution.

Another element of confusion comes from the official discourse of the Chiapas government, which tried to minimize the epidemic by underestimating the number of cases and deaths. For a long time, the numbers of the Chiapas Ministry of Health did not change, when more and more people knew of sick or dead people personally, and all you needed to do was talk to someone working at a hospital to know they were already sinking under the arrival of sick people. But most of the hospitalized sick people are simply not tested, and the dead, tagged as an "atypical pneumonia" case, are not part of the statistics. Not to mention the majority of sick people who stay, and eventually die, at home. This gap between the official discourse and felt reality only feeds into a feeling of abandonment and rejection from the government system and creates all the more tension around the society's fractures. A whole portion of the population is feeling alone in this epidemic, as it already felt with respect to other diseases. 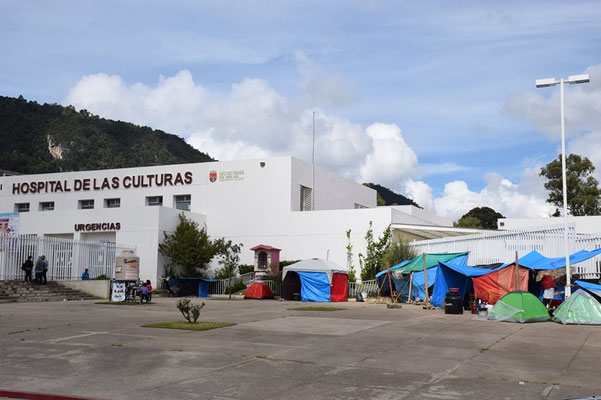 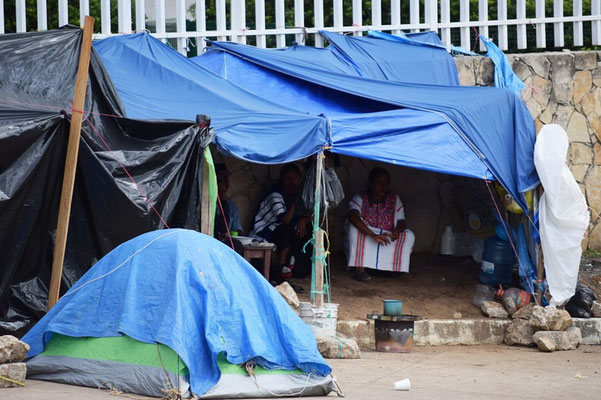 This type of confusion in governmental communication is generalized in Mexico where the President, often in opposition with members of his own team, keeps saying the epidemic is under control and declaring a return to normal and to his main projects, such as the construction of the "Maya Train", meant to transport in mass merchandise and tourists between Chiapas and the Yucatán peninsula. This project, that only thrills large contractors, does not seem to be the way to restore the trust of the population of his State.

IN YUCATAN, ADAPTATIONS AND RESISTANCE IN VILLAGES FOCUSED ON TOURISM

Various actors in the countryside of the Yucatán peninsula opted to do tourism for the past twenty years. It has become the main pillar of development and accumulation of capital in the region since the creation of Cancún fifty years ago (a strange anniversary in fact!). Since mid-March, and a couple days before the launching by the federal health authorities of the social distancing day, the stakeholders in community-based tourism have put their activities on hold, following the governmental authorities' local, municipal and federal measures.

In some cases, the fear of infection from foreign tourists has led to radical measures such as the closing of all access roads to the Isla Arena, Río Lagartos and  San Felipe ports. At Isla Arena, the residents organized themselves and do not let anyone in, and it is extremely difficult for the residents themselves to get out (Photo 5).

And yet, life goes on in the rural Maya villages of Yucatán.

Many residents returned to the milpa, a Mesoamerican production system and basic traditional food which modernity has progressively replaced (Photo 6). Some cooperatives have started the construction of ka'anche, a Maya horticultural practice consisting in raised beds or hothouses built with vernacular material.

On the ports side, some tourist agents took the initiative to go back to fishing and coordinate exchanges with other inland village cooperatives (Photo 7): that is how four cooperatives of Isla Aguada and Isla Arena in Campeche are trading with Miguel Colorado and Siho cooperatives, despite a decrease in transportation and municipal restrictions, demonstating their incredible organizational capabilities.

Though creative adaptations are surfacing, depression, anxiety and fears are also increasing. Tekit for example is a small town of ten thousand people located an hour's drive Southeast of Mérida where the main activity is the manufacture of guayaberas, typical Yucatán shirts. The arrival of the pandemic made it so that, overnight, the residents found themselves without work, the markets were closed and orders cancelled. Solutions have to be found day to day in order to deal with the crisis, in a situation where savings are non-existant, as with social security, and where informal jobs are often paid by the day. One solution has been the production of masks sold to neighboring cities, then directly to the government and later exported. After the masks, it was the doctors' uniforms, then body bags. These different activities allowed the residents to survive. It is not an isolated case: in San Agustin, a village located in southern Yucatán, in the center of the Puuc intercultural preserve, women members of the tourism cooperative also made 3000 masks (Photo 8).

However, by mid-September, only 6 out of the 24 associations of the peninsula alliance for community-based tourism restarted their activities. The virtual workshops and certifications continuent and look the same, but local authorities are reluctant to reopen villages with the increase in contaminations these past few weeks. Though the promotional campaign #viajaturismocomunitario was launched at the beginning of July 2020 to raise awareness among futur tourists, they are being kept waiting. The issue is crucial for community-based tourist centers where the members have chosen, for different reasons, to specialize in tourism, abandoning their other commercial activities. Those for whom tourism is an additional activity, mainly of Maya origins, were better able to adapt to the crisis for they could count on the other elements of their pluri-activity (milpa, beekeeping, silviculture, craftmanship, etc.).

The villages of Chiapas and Yucatán show the diversity of community responses to COVID-19. Confronted with the population's doubts because of a flagrant lack of information, adaptations and resistance have multipied: self-managed health checkpoints, readjustment of production sector, return to subsistance farming. In Mexico as in the rest of the world, the havoc caused by the coronavirus crisis is multi-shaped and brings about advantageous adaptations as well as worrisome upheavals.

Samuel Jouault is a geographer and Professor-researcher at the Facultad de Ciencias Antropologicas of the Universidad Autónoma de Yucatán and Associate Researcher at the Centro de Estudios Mexicanos y Centroamericanos (CEMCA-UMIFRE 16 MEAE CNRS-USR 3337 Latin America). He is the author of the report La Otra Cara del Turismo.